skip to main | skip to sidebar

It's Songkran, and merry makers are out on the streets!

"Farangs" are their favorite targets. So if you're one, prepare to get WET!

This water-throwing custom have come from the belief that the sea serpents or Nagas make rains by spouting water from the ocean.

Songkran, which is also the traditional Thai New Year, and for that matter the time for renewals, throwing water is like a ceremony assuring that there is ample water for the next year's crops.

Songkran is celebrated nationwide from April 13-15. And although the festival is a time to reflect on life's blessings and to pay respect to elders, in Thailand it is more associated with water throwing.

During this time of the year, families gather in their hometowns and make merit together. By doing so, they mark the end of the old year and welcome the incoming one. The word Songkran actually means "to move" or "change places". The three official days of the festival represent the last day of the old year, the transition day and the first day of the New Year.

On the first day, people "send off" the past year by holding several activities. Houses are cleaned thoroughly, while Buddha images and statues are bathed in scented water. Parades are staged in every town and Buddha images are carried to temples.

The second day sees families making merit with monks in the morning and ushering the arrival of the new year in the evening by splashing scented water on each other. It is believed the water will help remove bad luck. But today, this practice has evolved into a spirited competition of throwing huge amount of water at one another.

On the last day, people pay homage to ancestors, seek forgiveness and blessings from elders by sprinkling water on them.

Tourists should expect to be targeted by children and teens on the sidewalks, all of whom are armed with water guns and drums of water. Others hide in trucks and pick ups and are waiting to dump buckets of water to unsuspecting. Take everything in stride and try to participate in the water throwing itself. Best of all, have fun. 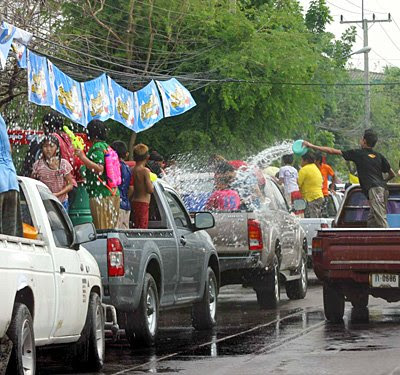 Like in other areas of Thailand, pickup trucks loaded with young people and a barrel or two of clean water drive around the city. Armed with water guns, buckets, or any vessel that can hold water, these people go hunting down willing victims to soak. In another scene: Groups of people (all wet) stand in front of open shops, or just beside the road, armed with water pistols and large barrels of water wait for passersby. Of course, some people will try to avoid a likely ambush, but as quickly as they move out, a pickup truck-riding gang will drive by out of nowhere, and douse them with cool water. 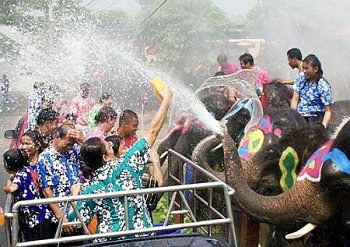 Anywhere, the objective is to get as many people possible to drench. It's chaos, but absolutely an extreme fun that lasts three days - or even longer in other parts of Thailand.

The second cultural value is loyalty to ancestors, which is achieved through merit-making.

The third focuses on the individual's sense of awareness of his/her responsibilities towards the family and home. It is demonstrated through the traditional ceremony of spring cleaning.

The fourth value addresses the importance of religion and highlights the well-defined roles and responsibilities of the temples and monasteries on the one hand and the community served by the religious institution on the other. 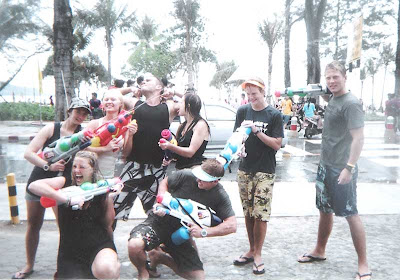 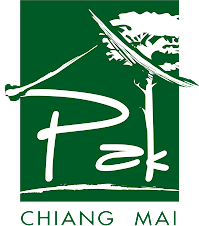